Stephen King is clearly one of the most prominent authors for the incredible amount of titles that he publishes yearly; for example, “The Institute” was published in 2019 and right after that, he announced his upcoming title “If It Bleeds”, which I have pre-ordered, and for his success rate of books to movie/TV adaptations. “The Outsider” is being adapted into a 10 episode TV series by HBO, and “Revival” published back in 2014 seems to be heading to the big screens as well and Mike Flanagan will be working on the new adaptation.

In an introspection of religion and afterlife, Stephen King delivers a title that attempts to tackle one of the biggest questions in life: what is there after life? – Inkish Kingdoms

In a long and meticulous plot building, King pours elements of his own life in his characters. From the rock and roll background and rhythm player to a standpoint in religion. Although I am not mentioning that he is an atheist or anything of the sort, there is an irreverent, for many, plot element in this story which is the existence of God and the power of faith. Not only the main character shares this music interest that King has, but also it is a short reflection on his time as an addict and his “dependence” in a higher power to overcome his addictions. 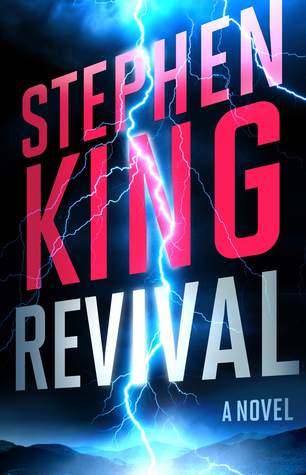 While the plot is slowly building up with small moments of tension and preoccupation, this title becomes more of a coming of age title, then into a contemporary narration of Jamie’s life, the main character, until we come rushing to a terrifying ending, characteristically of King’s style, where he delivers a hopeless and torturing resolution to the main character. Knowing that King’s inspiration comes from the great classical authors like Bram Stoker, Marry Shelly, and H.P. Lovecraft, he creates the expectation that this title will be worth to push through. Divorcing from other titles dissonance of plot vs length and conclusion, “Revival” is worth reading for all the nightmares it might revive in the reader in a short amount of 403 pages, my version.

On a personal note, this title is not terrifying for the monstrous actions or cthulhulian creatures, but for the realization that the afterlife heaven is a lie and that being alive is a constant torture since regardless of one’s actions, hell is the only destination. I find Stephen King’s style unique and characteristic, and I was impressed that the novel started with the phrase “and a shadow fell over him” which was a clear foreshadowing of the shocking conclusion of the novel.

So, the kingdom’s council has given this book:

Based on the reading experience and the reaction of the king … the knights have categorized this book as follows: